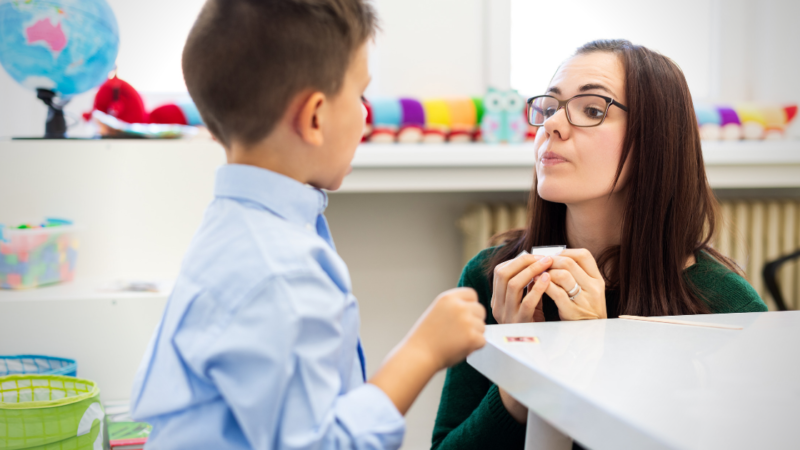 One of the core deficits associated with the diagnosis of Autistic Spectrum Disorder (Diversity) is the complications around speech development and social communication. The term non-verbal has been the term referred to as part of the diagnostic criteria. Non-speaking would be a better term, as non-verbal would refer to an inability to be able to communicate at all, while non-speaking would refer to the inability (or degrees of ability) to use oral speech. As with everything on the spectrum of autism, the ability to speak is also presented in a spectrum, with some autistic individuals with exceptional speech development, rich vocabularies and an ability to discuss complex subjects and others who have no or limited speaking skills, for whom it is difficult to grasp the concept of words and sentences.

Speech development is a process, starting with preverbal skills and progressing through several stages to the ultimate ability to use language appropriately in social communication and communicating needs. There are 2 main areas of language, namely receptive language (understanding) and expressive language (using language). To be able to develop language, a lot of factors play a role. Let’s look at a few of the aspects that could be addressed through biomedical treatment.

1. Sensory Experience
For optimal language development, one has to use one’s sensory organs appropriately. One has to be able to see or hear. Sensory dysregulation can affect the sensory experience and have an effect on speech development. Anxiety plays a big role in sensory dysregulation, so needs to be addressed to be able to improve sensory integration. The gut microbiome is also involved in the background of sensory integration, anxiety and optimal functioning.

3. Brain function
The brain has to store the information and be able to recollect the information appropriately to be able to respond by action or by communication. The classic areas involved in speech are known to be the Broca’s area, in the frontal area of the dominant hemisphere (mostly left) and the Wernicke’s area, in the back part of the temporal area, also of the dominant hemisphere. Broca’s area traditionally was seen to be involved with speech production and pronunciation, while Wernicke’s area is associated with the comprehension of written and spoken language. Without going into too much detail, one has to add that there are a host of other areas involved in speech too, including the cerebellum (small brain) and the motor cortex (governing motor skills). Inflammation in the brain, biochemical changes and genetic constitution affect expression of speech.

4. Motor skills
To be able to form words orally, the muscles of the mouth, lips, jaw, cheeks and tongue have to work together. This articulates recognisable words. One of the first signs of motor skills disorder around the mouth is when a baby is unable to breastfeed properly. I often get the history of a mom “not producing enough milk” while in actual fact the production of milk is really dependent on the stimulatin by the baby’s ability to suckle. Low motor tone, coordination difficulties and lack of endurance all play a role in the motor development around the mouth and subsequently the ability to speak.

To address speech development, one has to think holistically. All the areas of involvement need to be optimised. Some autistic children will never develop oral speech, but will develop the ability to communicate in other ways. That is also OK.

previousIs it PANDAS/PANS or Autism?